Review: Behind the Scenes (Apart from the Crowd #1) by Jen Turano 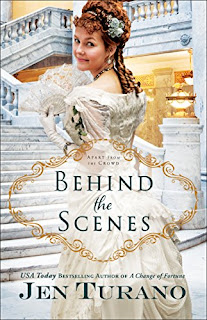 Miss Permilia Griswold may have been given the opportunity of a debut into New York high society, but no one warned her she wasn't guaranteed to "take." After spending the last six years banished to the wallflower section of the ballroom, she's finally putting her status on the fringes of society to good use by penning anonymous society gossip columns under the pseudonym "Miss Quill."

Mr. Asher Rutherford has managed to maintain his status as a reputable gentleman of society despite opening his own department store. While pretending it's simply a lark to fill his time, he has quite legitimate reasons for needing to make his store the most successful in the country.

When Permilia overhears a threat against the estimable Mr. Rutherford, she's determined to find and warn the man. Disgruntled at a first meeting that goes quite poorly and results in Asher not believing her, she decides to take matters into her own hands, never realizing she'll end up at risk as well.

As Asher and Permilia are forced to work together and spend time away from the spotlight of society, perhaps there's more going on behind the scenes than they ever could have anticipated. . . .

Behind the Scenes was another hilarious, laugh-out-loud delight from Jen Turano. I know when I start a Turano book that I'm in for a fun time. Her books always leave me with a big smile on my face.

Permilia is an endearingly unique character, odd by society's standards, but genuine, helpful and kind to those who truly know her. Some of the situations she found herself in...oh my...so outrageous, but so hilarious!

If you're a fan of comedic historical fiction, don't hesitate to pick up a Jen Turano book. You're in for a load of laughs!