This week I'm featuring Beast Hunter: A Prequel Novella to Kill the Beast by Michele Israel Harper. I just finished this novella (loved it) and should have my review up sometime next week. 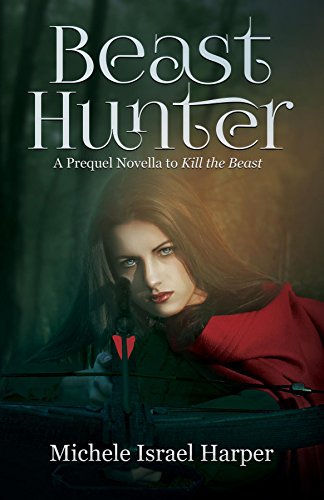 Toes frozen, Rose sucked in a breath as the castle materialized before her and stretched far above her head. Moonlight blazed on the barren trees, lighting the forest as if it were midday.

The witch smiled, taking her time to lift the cup to her lips.

Ro’s people are starving. A curse has overtaken her land, blackening the soil, wiping out crops, and bringing ruin to all. She doesn't know what to do.

The only people who thrive are the huntsmen, brought in by the mysterious Gautier to stem the flow of ravenous creatures looking for food.

When Ro accidentally kills a wolf, an idea begins to form. Could she become a huntress? Earn enough livres to feed her family?

But her world is shattered when her father promises her to a beast in exchange for his own life. If she doesn’t go, a curse will fall on her family worse than the one destroying their land. But Ro is determined to save her family another way.

Will Ro have the courage to seek her own fate instead of the one pressed upon her?