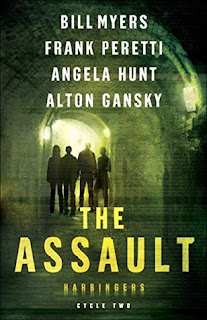 The Next Wave of Stories in the Harbingers Series Arrives

Cycle 2 of the Harbingers series continues the story of four gifted strangers brought together to fight a growing darkness.

In Bill Myers's "The Revealing," the team finds themselves in Rome trying to retrieve the mystical spear Hitler once owned--the very spear that pierced Christ's side. This task will take them from hidden chambers inside the Vatican to a mysterious seaside cave with powers they could never expect.

Frank Peretti's "Infestation" unleashes a microscopic evil on the world that deceives, blinds, kills, then spreads. The Harbingers team must confront a monster bent on seducing and destroying mankind.

In "Infiltration" by Angela Hunt, the team is wounded and barely holding together. Forced to split up, they realize their investigations have led them into dangerous waters.

Alton Gansky's "The Fog" unleashes a supernatural mist unlike any other. There are vicious things in the fog that kill whatever they find. One team member realizes that the ultimate sacrifice may have to be made.

The Assault: Cycle Two of the Harbingers series was just as strange and spooky as the first cycle, maybe even more so. These stories were hard to put down and had me reading them as fast as I could. They were immensely compelling.

In The Revealing, the gang is in Rome and tasked with finding the (real) Spear of Destiny. I was extremely intrigued with this story. So interesting!

Well, Frank Peretti certainly knows how to write a truly chilling story! In Infestation there's more trouble with the animals... and it seems to be escalating quickly.

Infiltration was a bit of a slower read for me, but still very interesting. Most of the gang's researching and trying to find out more about The Gate. Andi is studying a mysterious orb and seeing a psychiatrist to help deal with fallout from the previous episode.

The Fog starts off a little slow, but then...WHAM... the action picks up and my goodness... it was STRESSFUL! I couldn't read it fast enough.

I am fully invested in these characters' stories and can't wait to start Cycle Three!