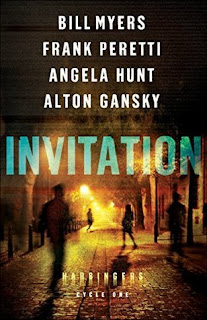 In "The Call" by Bill Myers, four strangers are drawn together to help a student at the mysterious Institute for Advanced Psychic Studies. His gifts are supposedly being honed to assist world leaders . . . but there are some very disturbing strings attached. Frank Peretti's "The Haunted" confronts a supernatural mystery, a case of murder, and an exploration into the darkness of the human heart, all centering around a mysterious house.

In Angela Hunt's "The Sentinels," animals around the world are mysteriously dying. What could it mean? When the tragedy begins to touch Andi's dreams, she discovers a terrifying theory. "The Girl" by Alton Gansky is a gripping tale of a young barefoot girl found holding a scroll in the snowy Oregon mountains. She is sweet, innocent--apparently not of this world--and something wants to kill her.

These stories were weird and strange and a little bit spooky. I don't mean that in a bad way. I like weird and different stories and these definitely fit the bill. They're written in a very compelling way. I had a hard time setting it down when 'real life' called. They had a way of lingering on my mind long after I finished. I'd find my mind wandering back to these stories and what they meant, wondering what was going on and going to happen next.

Each of the four stories are written by a different author and from the perspective of a different character. The first one, The Call, sets the stage for the entire series. It introduces the characters and brings them together.

The Haunted was probably my least favorite of the bunch, but by no means was it bad. It kept me engaged and turning the pages as fast as I could, but my goodness... it was scary! It gave me goosebumps that lingered throughout the whole tale.

The Sentinels was my favorite in the collection. It kinda made me think of the TV show Zoo, what with all the weirdness going on with the animals, but at the same time, it was completely different too. It was really good, though there was one part that was quite terrifying and did lead to a sleepless night for me, lol. (I couldn't get the picture it painted out of my head.)

The Girl was told from Tank's POV, which I really enjoyed. He's my favorite of the ragtag group, so that was interesting. It was a little slower paced than the other stories, but it was so good. And it further reiterated Tank as my fave. He's such a great guy.

If you're looking for a unique and different read that will leave you questioning, Invitation (Harbingers) is an excellent pick. I can't get these characters out of my head and am eager to find out what happens next!