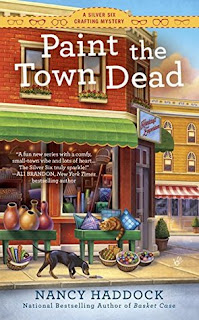 From the national bestselling author of Basket Case comes the second mystery starring the crafty and cantankerous Silver Six.

Leslee Stanton Nix—aka “Nixy”—thought moving to small-town Lilyvale, Arkansas, would be about as thrilling as watching paint dry. But keeping up with her retired Aunt Sherry and her troublemaking housemates—collectively known as the Silver Six—has proven to be as exciting as it is exasperating.

To kick off the grand opening of their craft shop, the Handcraft Emporium, Nixy and the Silver Six invite Doralee Gordon to teach a gourd painting class. Doralee’s spirit gets squashed when her ex-husband crashes the class with his new fiancée, but things really get messy when the bride-to-be later turns up dead. Now it’s up to Nixy and the Silver Six to use their melons to find the killer—before someone else gets painted out of the picture...

I loved the first book in this series, so I was really looking forward to Paint the Town Dead. It was great! The Silver Six were just as amusing as ever. It's fun to watch their antics and see Nixy try to reign them in, but in the end, just join in on the fun.

It took a little bit for the mystery to get going, but once it did I was fully engaged. There were quite a few suspects, so that kept me guessing. I had my suspicions, but was never 100% sure.

Paint the Town Dead was a great addition to the Silver Six mysteries and can be enjoyed even if you haven't read book one.