Can't Wait Wednesday: The Story Peddler (The Weaver Trilogy #1) by Lindsay A. Franklin 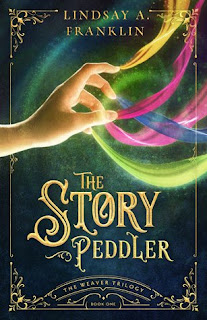 This week I'm featuring  The Story Peddler (The Weaver Trilogy #1) by Lindsay A. Franklin releasing May 1, 2018.

During her final story peddling tour, a tale of treason spills from her hands, threatening the king himself. Tanwen goes from peddler to prey as the king’s guard hunts her down . . . and they’re not known for their mercy. As Tanwen flees for her life, she unearths long-buried secrets and discovers she’s not the only outlaw in the empire. There’s a rebel group of weavers . . . and they’re after her too.

Why I Need It
When I first saw the cover, I was instantly intrigued. And then I read the synopsis and became super excited. I'm always on the lookout for new and interesting fantasy. I can't wait to dive into this one!