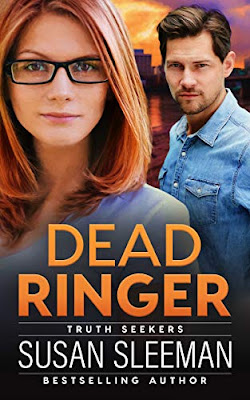 About the Book
She was hiding from her past…
When a local woman goes missing and Sheriff Blake Jenkins delivers her blood sample to DNA expert Emory Steele for analysis, Blake discovers Emory is a dead ringer for the missing woman. Blake’s gut says the woman is related to Emory. But Emory rejects the notion, requiring a DNA test before she’ll concede that she does indeed have a twin sister she never knew about.

Now she’ll do anything to see it come to light.
Emory joins Blake in a search for her missing sister, but when an attempt is made to abduct Emory as well, they begin to think the abduction is related to Emory’s birth parents. Blake vows to keep her under his watch until they discover what this maniac is looking for and bring him to justice. But Emory balks at him wanting to keep her under constant surveillance as she’s struggling to come to grips with a former brutal attack, and she wants nothing to do with a man who might want to get close to her. When it becomes clear that Blake is the only one who can keep her safe, will she let him get close enough to do so?
Amazon / Goodreads
MY THOUGHTS
Dead Ringer was great! It pulled me right in with a heart-pounding and intense beginning and kept me invested till the very last word. There was a lot of suspense and a good dose of romance. Exactly what I look for in this kind of book.

I really admired Emory's spunk and tenacity. She's just found out that she has a twin sister. Talk about a shock! Add to that the fact that her newly discovered sister has been abducted and is in serious danger, and you could say she's stressed to the max! But Emory doesn't let it get her down. She's got a sister to find and will do anything to make that happen.

There were a lot of characters from a previous series that I haven't read yet that popped up quite frequently here, so there were times where I definitely felt like I was missing something. And I found myself having a little trouble keeping all the characters straight, especially in the first half of the book. But other than that, I really enjoyed this romantic suspense and am eager to check out the rest of the series.
FOUR STARS
Posted by Ashley Sapp at 12:00 AM