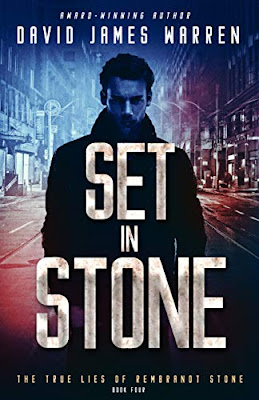 About the Book
Trapped in time, he’ll have to use the past to fix the present.

Thirty-eight women. Dead. All the in the past. All because Detective Rembrandt Stone played with fate, and somewhere in time unleashed a serial killer. He can’t undo their deaths, not anymore, but the serial killer is still at large, twenty-four years later, and now it’s personal. Especially when the evidence points to the last person on anyone’s radar: Rembrandt himself.
Now he’ll have to use the clues from his pasts to track down the killer in the present.

But the killer is onto him and puts the one person Rembrandt loves in his cross hairs. Now, Rembrandt must outwit time to save the people he loves.

Because time is playing for keeps.

The fourth installment of the True Lies of Rembrandt Stone will have you holding your breath and leave you gasping for more.

The continuing adventures of Rembrandt Stone from the creative minds of James L. Rubart, Susan May Warren and newcomer David Curtis Warren, writing as DAVID JAMES WARREN.
Amazon / Goodreads
MY THOUGHTS
This series just keeps getting better and better! Set in Stone is the best one yet! This installment has Rem stuck in his new present timeline. With his time-traveling watch missing, there's no way to go back to try to fix things. He's stuck with what he's got, for now, so he does his best to get acquainted with things and make himself at home. I thought it was a nice change to watch him try to acclimate to a new life instead of going back in time again to attempt to find a way to get his old life back.

Like I've come to expect from this series, there was a lightning-fast pace that had me racing to the conclusion in record time. This one took some very surprising turns that I never saw coming. I was left shocked, anxious, and heartbroken. The next book can't come out soon enough. I can't stop thinking about that ending!
FIVE STARS
Posted by Ashley Sapp at 12:00 AM