Can't Wait Wednesday: Gothel and the Maiden Prince (A Villain's Ever After) by W.R. Gingell

This week I'm featuring Gothel and the Maiden Prince (A Villain's Ever After) by W.R. Gingell releasing October 1. I've loved everything I've read by Gingell and am so excited to read her twist on Rapunzel. It should be really good. 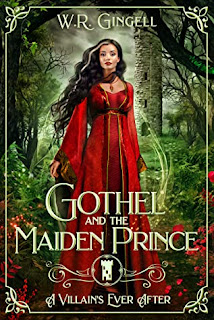 About the Book
Deep in the forest, far from the light, a sorceress with magic of the blackest kind keeps prisoner the princess she stole away years ago. From time to time, a prince will come to challenge her, but by and large, life is peaceful for Gothel.

And that's just the way she likes it.

She's not prepared for the earnest young prince who seems more determined to talk her to death than challenge her to a duel of magic; nor, having tricked him into a battle of questions, is she expecting him to show more interest in her than the tower-bound princess.

And Gothel is certainly not prepared to give up any of her power to keep him around, though she might be prepared to answer just a few more questions...

Gothel and the Maiden Prince is one of twelve short novels in A Villain's Ever After, a collection of standalone stories featuring villainous twists on some of your favourite classic fairytales. Read the series in any order for magical adventures . . . and fall in love with villains as you've never seen them before. Who said villains can't have happily-ever-afters?
What upcoming release are you eagerly awaiting?
Posted by Ashley Sapp at 11:00 PM