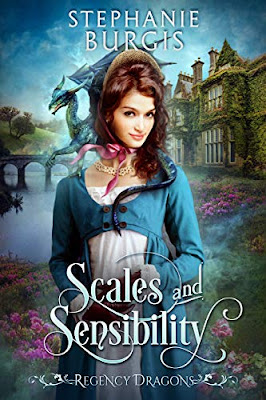 About the Book
Sensible, practical Elinor Tregarth really did plan to be the model poor relation when she moved into Hathergill Hall. She certainly never meant to kidnap her awful cousin Penelope's pet dragon. She never expected to fall in love with the shameless - but surprisingly sweet - fortune hunter who came to court Penelope And she never dreamed that she would have to enter into an outrageous magical charade to save her younger sisters' futures.

However, even the most brilliant scholars of 1817 England still haven't ferreted out all the lurking secrets of rediscovered dragonkind...and even the most sensible of heroines can still make a reckless wish or two when she's pushed. Now Elinor will have to find out just how rash and resourceful she can be when she sets aside all common sense. Maybe, just maybe, she'll even be impractical enough to win her own true love and a happily ever after...with the unpredictable and dangerous "help" of the magical creature who has adopted her.

A frothy Regency rom-com full of pet dragons and magical misadventures, Scales and Sensibility is a full-length novel and the first in a new series of standalone romantic comedies.
What upcoming release are you eagerly anticipating?
Posted by Ashley Sapp at 11:00 PM