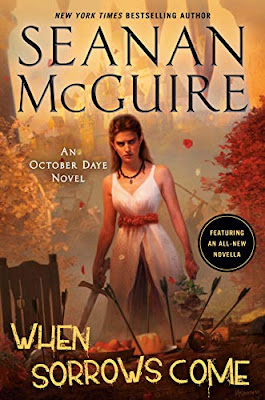 About the Book
Toby's getting married! Now in hardcover, the fifteenth novel of the Hugo-nominated, New York Times-bestselling October Daye urban fantasy series.

It's hard to be a hero. There's always something needing October "Toby" Daye's attention, and her own desires tend to fall by the wayside in favor of solving the Kingdom's problems. That includes the desire to marry her long-time suitor and current fiancé, Tybalt, San Francisco's King of Cats. She doesn't mean to keep delaying the wedding, it just sort of...happens. And that's why her closest friends have taken the choice out of her hands, ambushing her with a court wedding at the High Court in Toronto. Once the High King gets involved, there's not much even Toby can do to delay things...

...except for getting involved in stopping a plot to overthrow the High Throne itself, destabilizing the Westlands entirely, and keeping her from getting married through nothing more than the sheer volume of chaos it would cause. Can Toby save the Westlands and make it to her own wedding on time? Or is she going to have to choose one over the other?

Includes an all-new bonus novella!
Amazon / Goodreads
MY THOUGHTS
I was equal parts excited and nervous for this book. Finally, the wedding! But knowing Toby and the destruction that always seems to follow her, along with the ominous title of the book, I had serious doubts about if the wedding would actually take place. I don't want to say too much, but there were definitely some worrisome and stressful moments, some sweet and heartwarming moments, too.

Toby's attacked the day before her wedding in what looks to be a calculated attempt at destabilizing the regional monarchy. Toby's nickname as “the King-Breaker” has set her up to be the perfect scapegoat in the assassination attempt of the High King of the Westlands, who's hosting the wedding. Can they stop the plot to overthrow the King and make it to the wedding? Or is the kingdom, and wedding, doomed for failure?

I will say that it seemed to take this book a little while to really get going. There were a lot of recaps in the beginning, and while I appreciated the refresh (there's been a lot of time and other books in between), it kinda felt redundant after a while. But I'd say around 20% in, things really started to ramp up, the recaps lessened, and it became the action-packed and engaging story I've come to expect.

NOTE: This book does contain some strong language.
FOUR STARS
Posted by Ashley Sapp at 12:00 AM