Review: The Beast and the Enchantress (A Villain's Ever After #1) by Camille Peters 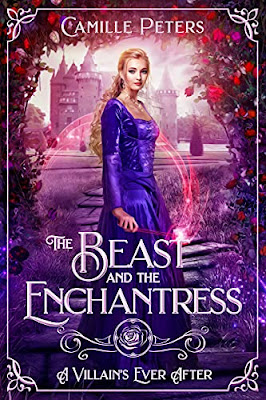 The Beast and the Enchantress (A Villain's Ever After #1) by Camille Peters
Y’all know I love a good retelling, so when I first heard about this series of stories from different authors that tell the villain’s side of things, I had to check it out. This first installment is a new take on Beauty and the Beast where the enchantress who cursed the beast gets to tell her tale and might just get her own happily ever after.

After her sister is left heartbroken by narcissistic Prince Gladen, Astrid decides to teach the prince a lesson and curses him. But something goes wrong, and she’s affected by the curse as well.

I didn’t know what to think of Astrid at first. She’s the villain but was almost sympathetic in the beginning. Was I supposed to like her? Root for her? Or not? I didn’t know, and that bugged me for some reason, lol. She had a great relationship with her sister Rosemarie, and it was nice to see the devotion and love they had for each other. Astrid didn’t want to see Rosemarie hurting so badly from the prince’s dismissal, so this was where things took a dark turn and her villainous nature began to emerge. But even through all this, she just seemed like a good, albeit annoying and immature, character who was making a poor choice. Maybe I was just expecting a straight-up traditional villain here who was more complex. But she came across as kind of weak and wishy-washy, and almost childish, at times. All of this was compounded by the fact that the whole story is told from the first-person point of view of Astrid. I kinda wish there would've been multiple povs, just to switch things up.

But I really did like Prince Gladen. I started enjoying the story more when he began popping up. He had a lot of depth and showed a side to him that was really endearing. He wasn’t the horrible person he first appeared to be.

I also appreciated the nods to the original story. How the rose came into play and the love of books.

While this wasn't one of my favorite retellings, it still had enjoyable moments and I'm eager to check out the rest of the books in this series. It's a neat concept.
Amazon / Goodreads
Available in Kindle Unlimited at time of posting
Posted by Ashley Sapp at 12:00 AM