Can't Wait Wednesday is a weekly meme hosted by Wishful Endings that spotlights and discusses the books we're excited about that we've yet to read. Generally, they're books that are yet to be released. It's based on Waiting on Wednesday, hosted by Jill at Breaking the Spine.
This week I'm featuring Autumn by the Sea (Muir Harbor #1) by Melissa Tagg releasing September 28. 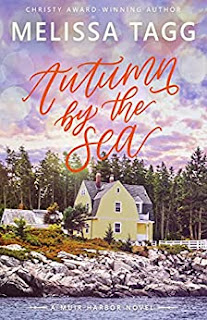 Worried for Maggie, Neil is suspicious of the city girl who shows up at the farm. But there's something about Sydney that tugs on him, drawing out secrets he never meant to share. While Neil grapples with the future of the farm, Sydney wrestles with a past that's messier than ever. Together, they're pulled into a mystery complete with a centuries-old legend, unexpected danger . . . and a love as deep and wild as the sea.
What upcoming release are you eagerly anticipating?
Posted by Ashley Sapp at 11:00 PM