Review: Autumn by the Sea (Muir Harbor #1) by Melissa Tagg 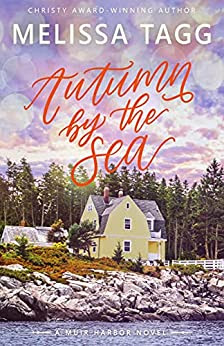 Worried for Maggie, Neil is suspicious of the city girl who shows up at the farm. But there's something about Sydney that tugs on him, drawing out secrets he never meant to share. While Neil grapples with the future of the farm, Sydney wrestles with a past that's messier than ever. Together, they're pulled into a mystery complete with a centuries-old legend, unexpected danger . . . and a love as deep and wild as the sea.
Amazon / Goodreads
MY THOUGHTS
What a fantastic start to this new series! There's something so comforting about Melissa Tagg's books. I just want to jump into the pages and get completely lost in the charming community she's created. I'd never leave if I had the choice.

I loved all the characters here. They were all so lifelike, so authentic. Neil, with his slight Scottish brogue, flannel shirts, hardworking attitude, and love for his family, was so swoonworthy. There were times when he really tugged at my heartstrings. And I couldn't help but root for Sydney. She'd had some really hard times, but she continually pressed on.

Muir Farms was such a charming place. Filled with fields of blueberries, goats, a cow, chickens, and plenty of land to roam, all with the added bonus of an ocean-front view. Yeah, that's my literal dream.

Autumn by the Sea was a heartfelt, genuine, and all-around great read. There were plenty of laughs, a few tears, and a bit of a mystery, too. It was a breath of fresh air and Melissa Tagg's best story yet. I'm so excited to visit Muir Harbor again for Indi's story in the next book, A Seaside Wonder.

I received an early copy of this book via NetGalley and voluntarily reviewed it. All thoughts and comments are my honest opinion.
FIVE STARS
Posted by Ashley Sapp at 12:00 AM