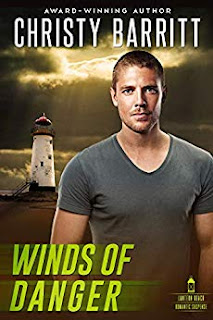 About the Book
Wes O’Neill is perfectly content to hang with his friends and enjoy island life on Lantern Beach. Something begins to change inside him when Paige Henderson sweeps into his life. But the beautiful newcomer is hiding painful secrets beneath her cheerful facade.

Police dispatcher Paige Henderson came to Lantern Beach riddled with guilt and uncertainties after the fallout of a bad relationship. When she meets Wes, she begins to open up to the possibility of love again. But there’s something Wes isn’t telling her—something that could change everything.

As the winds shift, doubts seep into Paige’s mind. Can Paige and Wes trust each other, even as the currents work against them? Or is trouble from the past too much to overcome?

What a suspenseful and fast paced read! It was great to finally get Wes's story. He's been a steadfast friend to the other Lantern Beach residents and I was so happy to get to know him even better in Winds of Danger.

Wes has finally found a wonderful woman, Paige the new police dispatcher. Things are new, but going well until his crazy ex-girlfriend shows up and starts stalking, terrorizing, and playing mind games with them. Trying her best to tear them apart.

Wes and Paige are such a great couple who compliment one another really well. I was on the edge of my seat, worried for them. I zoomed through the pages, racing towards conclusion and hoping for a happy ending for the pair.

Winds of Danger is another great romantic suspense from Christy Barritt.