Review: Ford (The Montana Marshalls #3) by Susan May Warren 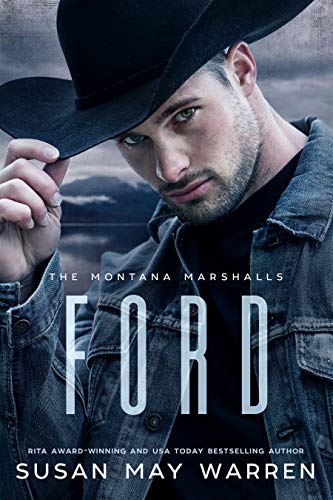 About the Book
Family…country…or the woman he loves…

Navy Seal Ford Marshall isn’t the kind to stand by and let a woman get hurt—especially when it involves his twin sister, RJ. So, when she makes the news, accused of sparking an international incident, he doesn’t care what it takes—he’s going to find her and bring her home.

But he might need a little help, so he calls on the woman who has had his back during the last three years—Petty Officer Scarlett Hathaway, former communications expert-turned Rescue Swimmer candidate. She’ll help him get into the country, watch his back, and…well, they might be able to have one last mission together before she leaves for a new life, a life he very much wants to be a part of now that she is off his team. Maybe he can convince her to give them a chance to kindle the spark that’s simmered between them for years.

Scarlett Hathaway isn’t sure what future she wants—not when she suddenly has to care for her little brother. Maybe she should quit the Navy and start a life with the man she can’t seem to get out of her heart. So yes, she’ll help Ford find his sister. And maybe, along the way, figure out if they have a future.

But finding RJ somewhere in the vastness of Russia with the FSB chasing them will push Scarlett beyond even her courage and make her question everything she thought she wanted…including Ford. What will it cost her to love a man who saves the world?

And when Ford is asked to choose between saving his sister, saving the world from a war, and rescuing the woman he loves…can he live with his decision?

I was so excited for this novel. Ford's side story in Tate was my favorite thing about that book, so I was very eager to get to know him and Scarlett better. To see where their journey took them. And I absolutely loved it! It's one of those books where I'm struggling to come up with the right words to express just how much I liked it. I had the same trouble with Knox and I liked this one even more.

It starts out so action-packed and that breakneck pace continues throughout the entire story. The characters get into some seriously dangerous and life-threatening situations that had me questioning if it just might be possible that things weren't going to work out this time. My heart certainly got a workout, that's for sure.

I've gotta say that I really enjoy the way Warren has formatted these books to include a main story featuring one couple, but also has a secondary story featuring a different couple. The stories always mesh so well together and, yet, it feels like I'm getting two for the price of one. Love that!

This has been a fantastic series so far and I'm so excited for Wyatt. He's still a little bit of a mystery and I'm eager to find out what excitement and adventures await him.