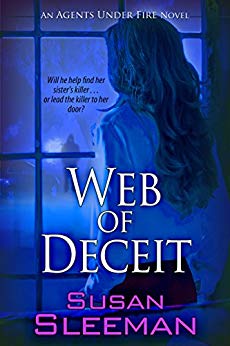 About the Book
Will he help find her sister’s killer . . . or lead the killer to her door?

When FBI Agent Kaitlyn Knight discovers her brother-in-law is Vyper—the notorious cyber-criminal and murderer wanted by the FBI—Kait doesn’t question her duty to arrest him. But when he murders her sister in front of her, leaving her infant niece motherless, Kait vows to hunt him down and bring him to justice while raising the baby.

Three years later, and not even a whisper of a lead in her search, Kait is about to give up hope of ever finding Vyper. All of that changes when he goes on a murderous spree taunting Kait with clues that she and homicide detective Sam Murdock must solve before her devious brother-in-law takes another life.

As the body count rises, Sam discovers the killing spree is really about striking back at Kait. He must put everything on the line—including the relationship he’s developed with Kait—to ensure her safety. The killer is waiting, watching her every move—and he won’t stop until he’s exacted his revenge and reclaims his rights to raise his daughter.

Web of Deceit has been on my TBR list for an embarrassingly long time. Why haven't I read it before now? I have no idea. I'm shaking my head for letting it sit there for so long, but I'm so glad I finally picked it up.

From the first line, I knew I was in for a wild, suspense-filled ride. There's so much action and intrigue. It hardly let up until the heart-pounding conclusion.

Fenton was a truly chilling villain. His madness, his rage, the lengths he went to seek his revenge were absolutely sickening. Kait was steadfast in her pursuit of capturing her brother-in-law. He had to be brought to justice for all the evil he'd done. She made a promise to catch him that she intended to keep it, no matter the cost. Sam was a great guy. He was the perfect counterpart to Kait and they had an instant chemistry that was smoking hot.

This was a true romantic suspense. It had the perfect combination of both genres. I'll definitely be looking forward to reading more books from this author.