Review: The Spice King (Hope and Glory #1) by Elizabeth Camden 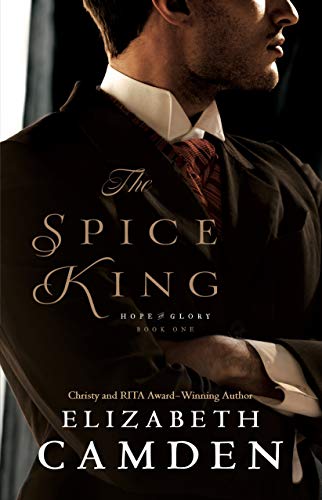 About the Book
Gray Delacroix has dedicated his life to building his very successful global spice empire, but it has come at a cost. Resolved to salvage his family before it spirals out of control, he returns to his ancestral home to save his brother and sister before it's too late.

As a junior botanist for the Smithsonian, Annabelle Larkin has been charged with the impossible task of gaining access to the notoriously private Delacroix plant collection. If she fails, she will be out of a job and the family farm in Kansas will go under. She has no idea that in gaining entrance to the Delacroix world, she will unwittingly step into a web of dangerous political intrigue far beyond her experience.

Unable to deny her attraction to the reclusive business tycoon, Annabelle will be forced to choose between her heart and loyalty to her country. Can Gray and Annabelle find a way through the storm of scandal without destroying the family Gray is fighting to save?

The Spice King has everything I love in a historical read and so much more. There's espionage, secrets, betrayal, intrigue, romance. I could go on and on.

I always feel like I learn new and interesting bits of history when I read an Elizabeth Camden book and this one is no different. The Spice King deals with a subject that's very important to me. Food safety. I had no idea how lax the regulations were. Food labeling was pretty much nonexistent and oftentimes, the product wasn't even what it said it was. For example: a jar of applesauce that had no apples in it, but was actually pumpkin that was chemically treated to taste like apples. Crazy! This completely blew my mind and made for an absolutely compelling read. I know there's still room for improvement with our food nowadays, but thank goodness it's better than it used to be.

I'm gonna say something that shocks even me, but, here I go. Move over Romulus White. I've got a new favorite Elizabeth Camden hero and his name is Gray Delacroix. Never did I think there'd be a leading man that could outdo Romulus from 'From This Moment', but Gray Delacroix has done just that. So dreamy. So cranky. He has his faults, for sure, yet he's such an upstanding, all-around good guy. He's taken over his family's spice empire and is adamant about making sure all the ingredients are pure and of the best quality. Unlike his biggest competitor whose only concern is making money and will use unsafe ingredients to get the biggest profit.

Annabelle Larkin has a sunny, upbeat, and always optimistic attitude. She's Gray's complete opposite, but they have some seriously strong chemistry. I liked her, for the most part. Though she did make a decision that really irked me. I know why she did it, but I still wanted to shake some sense into her.

I want to talk about so many more things, but they verge into spoiler territory. Suffice it to say, The Spice King is a must read for any fan of historical romance. It's my new favorite novel from this author and I can't recommend it highly enough.

I received a copy of this book from the publisher via NetGalley. All thoughts and comments are my honest opinion.