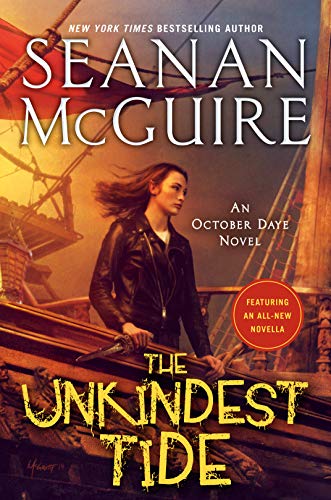 About the Book
Hundreds of years ago, the Selkies made a deal with the sea witch: they would have the sea for as long as she allowed it, and when the time came, she would call in all their debts at once. Many people assumed that day would never come. Those people were wrong.

When the Luidaeg—October "Toby" Daye's oldest and most dangerous ally—tells her the time has come for the Selkies to fulfill their side of the bargain, and that Toby must be a part of the process, Toby can't refuse. Literally. The Selkies aren't the only ones in debt to the Luidaeg, and Toby has to pay what she owes like anyone else. They will travel to the fabled Duchy of Ships and call a convocation of the Selkies, telling them to come and meet the Luidaeg's price...or face the consequences.

Of course, nothing is that simple. When Dianda Lorden's brother appears to arrest Dianda for treason against the Undersea, when a Selkie woman is stripped of her skin and then murdered, when everything is falling apart, that's when Toby will have to answer the real question of the hour.

Liar's daughter, come to turn back the tide.

You ever read a book and feel like you're at home in it? You sink into the pages and get hopelessly, happily lost? Feel like you're right in the thick of things, experiencing everything right alongside the characters? Not just as an observer, but an actual participant? Every single time I open the pages to a book in this series, I experience that magic. And I love every second of it.

In The Unkindest Tide, the Luidaeg has finally called in Toby's debts. She can't refuse to help Luidaeg, even if she wanted to. She doesn't mind, not really. She'll be helping to set right a wrong that's needed to be done for centuries. But the outcome will affect Toby's daughter in a way that there's no turning back from. The almost nonexistent relationship between mother and daughter has the potential to deteriorate even more, past the point of no return.

I always try to take my time with the new Toby book. I try to savor it, make it last as long as I can. But that never seems to work out. It never fails, I reach a certain point and I can't help but read it as fast as possible. I inevitably reach the end long before I want to and my journey with these characters concludes swifter than I was ready for.

The Unkindest Tide was another epic book in this favorite series of mine. It was exactly what I was hoping it would be and so much more. We learn a lot and yet there's still many more answers to be revealed, leaving me so hungry for the next book. If you're a fan of urban fantasy, pick up this series. It's the best! Start with book one, though. There's a lot of history that's not to be missed out on.


(Toby talking about the Luidaeg)