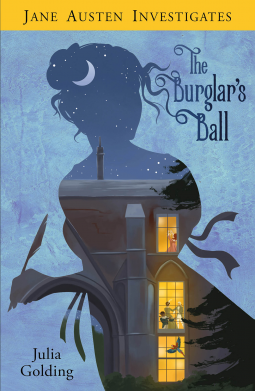 Join young budding detective Jane Austen in her second investigation to uncover a devious diamond thief at the glitziest, most scandalous ball of the year! Inspired by Sense and Sensibility.

‘No one who had ever seen Jane Austen in her infancy would suppose her to be born to solve crimes. From her early love of sugar plums, and cleverness in hiding her expeditions into the pantry, her mother declared her far more likely to commit them. However, as Jane would counter, there was no better person to identify the culprit than the thief turned thief-catcher.’

When the headmistress invites her past favourite pupil to attend their end of term ball, Cassandra brings her younger sister, Jane, along too. Cassandra plunges into the feverish excitement of preparing for the biggest event of the year – the dresses, the dances and the boys expected from the neighbouring school.

Feeling rather excluded, sharp-witted Jane unearths the reason for the fuss – the headteacher wants to impress a rich family returned from India as the school is at risk of going bankrupt. Jane also befriends the dancing master’s assistant, a former slave, called Brandon, who is as quick to notice things as she. At the ball, a diamond necklace is stolen from a locked room and they are propelled into a race to uncover the burglar and save Brandon from gaol.

With the ever-present Austen spirit, Jane with notebook in hand, boldly overcomes the obstacles to finding the truth.

Perfect for readers aged 9-109, and for fans of Katherine Woodfine and Lucy Worsley.
Amazon / Goodreads
MY THOUGHTS
This was a delightfully fun mystery! I loved the first book in this series, so I was ecstatic to have a new mystery to solve alongside young Jane.

This time, Jane's trying to catch a thief who stole a diamond necklace at the summer ball at her old school. The mystery was perplexing and kept me guessing. I had strong suspicions about who the culprit might be, but there were plenty of viable suspects that had me questioning my initial thoughts, plus a surprising twist or two, added to the mix.

This witty and fun mystery is sure to appeal to readers of all ages. I had such a great time reading it and highly recommend it to anyone who enjoys historical mysteries.

I received an early copy of this book and voluntarily reviewed it. All thoughts and comments are my honest opinion.
FOUR STARS
Posted by Ashley Sapp at 12:00 AM