Review: The Way We Are (Gaining Love) by by Tanya Eavenson 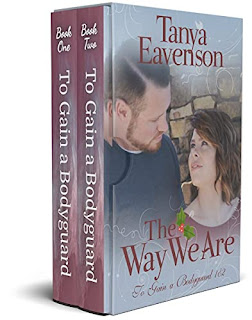 About the Book
To Gain a Bodyguard - Book One

Undercover ICE agent Madi Reynolds has spent years infiltrating a human-trafficking ring, but when her life is threatened, she is forced to walk away and advised to leave the country. Undeterred, she continues her plan to attend her brother’s Christmas wedding, with her partner assigned as her bodyguard. But after seeing Brice care for her niece, she finds it's more than her life that needs protecting. Is there really any defense for the heart?

War Veteran and ICE agent Brice Johnson has been defending his country and American lives for as long as he can remember. Now, he faces the biggest assignment of his life--protect the woman he loves. He's never been one to run from a fight, but when an old flame butts in expecting a second chance with Madi, and crippling visions of war call out to him, he begins to wonder if surrender is an option after all.
To Gain a Bodyguard - Book Two

Undercover ICE agent, Brice Johnson, fell in love with his partner, but the fight to control his PTSD drove him to leave her and his assignment.

Deep undercover, ICE agent Madi Reynolds’ identity is blown, and she is involved in a hit-and-run meant to kill. Lucky to be alive after her vehicle was forced off the mountain, she finds herself in a wheelchair and facing an unknown future.

Even though the men responsible were tracked down and brought to justice, Brice’s gut tells him Madi is still not safe. Details of the investigation aren’t adding up. In secret, Brice moves to Helen, Georgia, across the street from Madi. But how long can he stay in the shadows when seeing her struggle day in and day out bombards him with memories of their happier days.

Unable to forgive himself for Madi’s accident, Brice vows to protect her, but is it enough? Is he enough?
Amazon / Goodreads
MY THOUGHTS
The Way We Are was a heartfelt, faith-filled romance featuring likable characters and a moving, inspirational story.

I can't even tell you how excited I was for this book. I loved Madi and Brice in To Gain a Bodyguard, but wanted more of their story. The Way We Are delivers that. It includes the original story and adds part two, which I loved just as much, maybe even more, than the first.

Book one featured Madi and Brice coming together. Book two finds them, a little while later, falling apart, no longer together and yet still drawn to each other. My heart broke for them and their struggles. I was rooting so hard for them. They're such a great pair and deserved all the happiness in the world.

If you're a fan of contemporary romance, I highly recommend The Way We Are.
FIVE STARS
Posted by Ashley Sapp at 12:00 AM