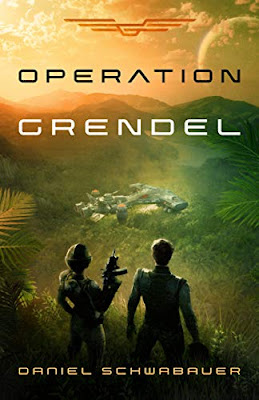 About the Book
It’s the war story he’s dreamed of. But the battle may cost him his mind.

But when his commanding officer, Captain Ansell Sterling, is fatally wounded before the negotiations can begin, Dahl can no longer just report on the mission. He’s ordered to complete it. With help from the AI embedded in Sterling’s comms bracelet, Dahl must impersonate his commander—a Marine Corps hero and psychological operations expert.

However, Sterling’s AI may be luring him to surrender more than he realizes. And the mission Corporal Dahl thinks he’s running isn't the only operation underway.
Amazon / Goodreads
MY THOUGHTS
I'm kinda at a loss about what to say because I'm still reeling from that ending! What a shocker! It completely blew my mind and sorta threw me for a loop. I haven't been that surprised in a long time. I want to reread the book immediately to see if I can pick up on some of the clues I obviously missed.

I loved the writing style and will definitely be on the lookout for more from this author. It was intense, exciting, and filled with so many surprising twists. A page-turner, for sure. I don't really read much military sci-fi, but I think that needs to change because I enjoyed this one so much. I highly recommend it.
FOUR STARS
Posted by Ashley Sapp at 12:00 AM