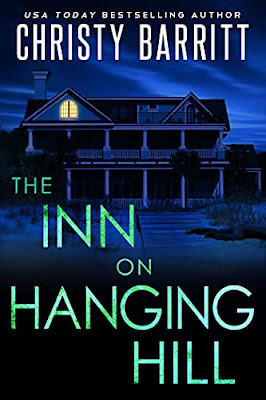 About the Book
Lindsey Waters never wanted to return to the seaside inn where she grew up. Too many traumatic memories haunt the place, both from her childhood and from days gone by. But with guilt relentlessly chasing her after a tragic choice, she’s desperate for a fresh start.

Mysterious incidents begin plaguing the inn—dangerous incidents—that make it clear someone wants to scare Lindsey away. But why? Does it have anything to do with the two weeks missing from her memory when she was abducted at age twelve?

Childhood friend Benjamin Newsom seems like an answer to prayer when he shows up to work as a handyman. But something is different about him, something Lindsey can’t put her finger on. She’s certain Benjamin harbors secrets.

As peril continues to close in, Lindsey must decide if she wants to face her past or run. She doesn’t know whom she can trust, and whatever choices she makes will determine if she lives or if she becomes part of the inn’s tragic legacy.
Amazon / Goodreads
Available in Kindle Unlimited at time of posting.
MY THOUGHTS
The Inn on Hanging Hill was an intriguing mystery that had me racing through the pages. Even though it's book two, it stands alone just fine. There's no connection to the previous book.

Lindsey's come back to her childhood home to fix up her family's dilapidated old inn and sell it. Lots of bad memories are attached to the place, and she's ready to get rid of it. When she was a preteen, Lindsey went missing for two weeks, but she can't remember exactly what happened then. Her memories for those two weeks are gone. Now that she's back, it looks like the past may be coming back to haunt her when mysterious things start happening around the inn and she starts receiving threats.

I can't say that I ever really connected with the characters, and there was some suspension of belief needed in a couple of places, but the mystery kept me very interested. I was so curious about what was really going on, who the culprit was, and why they did it. I didn't figure it out until right before the reveal. There were definitely some twists and turns, and some surprises that I didn't see coming.
3.5 STARS
Posted by Ashley Sapp at 12:00 AM