Book Beginnings + Friday 56: A Place Of Magic by Merrie Destefano

This week I'm featuring A Place Of Magic by Merrie Destefano. It's the perfect read for this time of year. Slightly spooky with a bit of a gothic-vibe to it. Loved it! 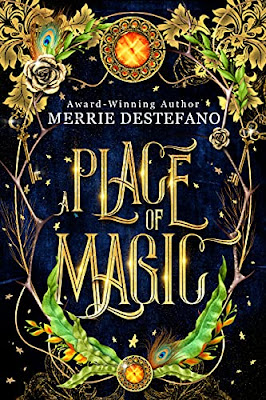 About the Book
Halloween is the wrong time to visit Ticonderoga Falls.

Dangerous fae hunt in the nearby woods.

Maddie MacFaddin (“Mad Mac” to fans of her bestselling magical stories) spent a blissful childhood summer in Ticonderoga Falls. That’s where she wants to be when her adult life is falling apart. The nearby forest holds many memories, some joyous, some only half-remembered. But she doesn’t remember the dark parts—and knows nothing of the legend that keeps the area’s terrified residents captive. She has no recollection of Ash, the magnificent creature who saved her life as a child, or that his kind preys upon humanity.

Ash, a Darkling fae, has been trapped in Ticonderoga Falls for a century—ever since his wife’s tragic death. Now, his own curse holds him captive. As penance, he’s required to hold a Hunt once a year. Then, hungry fae will descend upon the small village to harvest the dreams of the inhabitants.

There are rules about harvesting humans; the poor creatures are so delicate. If you take too much, they’ll die. Without dreams, they perish. And perish they do, now and then, despite Ash's efforts to keep them safe. Then he realizes Maddie is the prey his unwanted guests are after. But, try as he might, this time he’s not strong enough to protect her. The entire village is in danger.

Soon the Hunt will begin. And no human will be safe.
Note: This is a re-release of Feast: Harvest Of Dreams. The book has been rewritten since its 2011 release.
Book Beginnings

Madeline MacFaddin was just a girl - bony, pale-skinned and wild - when Ash stumbled upon her in the woods.

She slammed the door shut. Then she leaned against it, terrified that she was going mad. What was she doing? She had no evidence that the monsters in the woods had been real. Maybe she really had stumbled through deadly nightshade, like the vet said. She closed her eyes and prayed that she would hear Ash's footsteps thudding down the stairs as he walked away.