Review: Blood from a Stone (The True Lies of Rembrandt Stone #5) by David James Warren 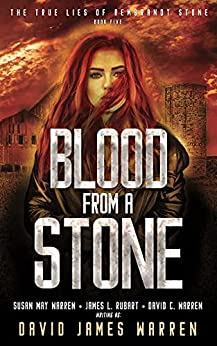 About the Book
He fled the future with blood on his hands. Now, he’ll do anything to stop a killer.

Tragedy has yet again taken from Detective Rembrandt Stone everything he loves. Now, he has one last chance to get things right and stop a killer he’s been hunting across four timelines. Instead, he gets tangled in a petty crime that just might cost him his once chance at justice.

With two murders to stop, and thirty-eight lives still in the balance, Rembrandt must play his hand against time just right if he wants to win his future… Play it wrong and his life will stay shattered beyond repair.

What sacrifices will he have to make to come home to his wife and daughter?

The stakes have never been higher in the heart-wrenching, edge-of-your-seat fifth story of the True Lies of Rembrandt Stone.
Amazon / Goodreads
MY THOUGHTS
Blood from a Stone was another fantastic installment in this series. And like I've said before, each book just gets better and better. This is the best one yet. I've become so invested in Rem and Eve's lives, hoping, wishing, praying that everything will work out in the end.

The stakes have never been higher for Rem. This is his last chance to get things right, to fix the past, and create a future he can live with. And, my goodness, what a surprising journey to the past this was! So many twists and turns I didn't see coming and an ending that has me clamoring for the next book.
FIVE STARS
Posted by Ashley Sapp at 12:00 AM