Can't Wait Wednesday: The King of Koraha (Archives of the Invisible Sword #3) by Maria V. Snyder

This week I'm featuring The King of Koraha (Archives of the Invisible Sword #3) by Maria V. Snyder releasing November 22. I'm really hoping that this conclusion to the series will be as good as book one, The Eyes of Tamburah. Book two, The City of Zirdai, was just kinda meh for me, but that seems to happen with a lot of book twos. I wonder why that is? Anyway, I'm looking forward to seeing how this series concludes. 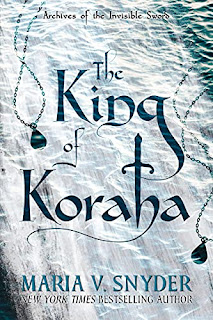 About the Book
Hard on the heels of trouble in Zirdai city, Shyla Sun-Kissed and Rendor are ordered to report to the King of Koraha - a summons that is deadly to ignore. The King holds the key to Koraha's existence, but a formidable new enemy threatens Koraha's very survival and the King desperately needs Shyla and Rendor's help.

Wielding a terrifying and unknown magical power that can convert opponents into devoted soldiers, the mysterious army is hellbent on usurping the crown. Shyla and Rendor are tasked with discovering who in the seven hells these insurgents are. And what their real endgame is.

Trekking through the punishing conditions across the searing surface of Koraha, and facing numerous unseen foes and untold danger, they must follow the clues to uncover the truth before it's too late. The fate of the King and all the citizens of Koraha rests in their hands...
What upcoming release are you eagerly awaiting?
Posted by Ashley Sapp at 11:00 PM