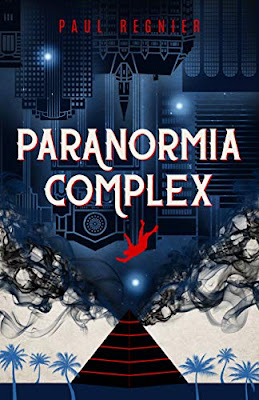 About the Book
When demonic forces attack his city, can a lone comic bookstore employee stand against them?

Graphic novelist Chris Loury uncovers a supernatural threat to his community. As a result, he and his girlfriend Amber end up in the crosshairs of spiritual warfare. Finchelus, his quirky angelic guardian, promises aid, but his sporadic appearances offer little assurance. After the last supernatural encounter nearly took his life, Chris is reluctant to dance with the devil a second time.

Things escalate quickly when a hooded figure with red eyes and superhuman strength stalks Chris. As he survives one attack after another, the dark spirits grow stronger. When they launch deadly attacks on his friends and land Chris in the hospital, he fears this supernatural battle is beyond him.

Can Chris save his girlfriend, his city, and his own life from the gathering demonic storm?

Paranormia Complex is a riveting urban fantasy adventure. If you like underdog heroes, supernatural battles, and a healthy dose of comedy, then you’ll love Paul Regnier’s action-packed novel.
Amazon / Goodreads
My Thoughts
Paranormia Complex was such a great read. This humorous Christian urban fantasy was exactly what I needed at the time. The first book, Paranormia, was one of my favorite reads last year, so I was very excited to check out this sequel. I had high hopes and it completely lived up to them.

Chris is back and facing another battle between the forces of good and evil. He's still the same snarky guy I came to love in the first installment, but he's a bit more mature this go around. It was nice to see his character growth. I loved seeing Finch again too. He's such a fun character. I would've loved even more of him, but when he did popup he really stole the scene.

This book had me laughing out loud one second and then holding my breath in anticipation the next. It was funny, intense, and scary, at times. I loved every second of it. I hope there's many more installments to come. This series, and the characters, are awesome. I never want it to end.
Five Stars
Posted by Ashley Sapp at 5:00 AM