Can't Wait Wednesday: The Prince of Spies (Hope and Glory #3) by Elizabeth Camden

Can't Wait Wednesday is a weekly meme hosted by Wishful Endings that spotlights and discusses the books we're excited about that we've yet to read. Generally, they're books that are yet to be released. It's based on Waiting on Wednesday, hosted by Jill at Breaking the Spine.
This week I'm featuring The Prince of Spies (Hope and Glory #3) by Elizabeth Camden releasing February 16, 2021. I've been loving this series so far and am so excited to finally get Luke's story. We've gotten to know him a little in the previous books and he's quite the interesting character. I can't wait to find out more about him. 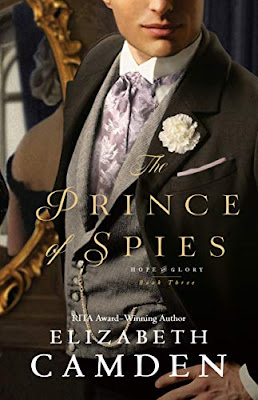 About the Book
Luke Delacroix has the reputation of a charming man-about-town in Gilded Age Washington, DC. In reality, he is secretly carrying out an ambitious agenda in Congress. His current mission is to thwart the reelection of Congressman Clyde Magruder, his only real enemy in the world.

But trouble begins when Luke meets Marianne Magruder, the congressman's only daughter, whose job as a government photographer gives her unprecedented access to sites throughout the city. Luke is captivated by Marianne's quick wit and alluring charm, leading them both into a dangerous gamble to reconcile their feelings for each other with Luke's driving passion for vital reforms in Congress.

Can their newfound love survive a political firestorm, or will three generations of family rivalry drive them apart forever?
What upcoming release are you eagerly awaiting?
Posted by Ashley Sapp at 11:00 PM