Can't Wait Wednesday is a weekly meme hosted by Wishful Endings that spotlights and discusses the books we're excited about that we've yet to read. Generally, they're books that are yet to be released. It's based on Waiting on Wednesday, hosted by Jill at Breaking the Spine.
This week I'm featuring When Twilight Breaks by Sarah Sundin releasing February 2, 2021. In my opinion, nobody does WWII fiction as good as Sarah Sundin. Her books are always my most anticipated reads of the year and always wind up on my Favorite Books of the Year list. There's a real sense of authenticity to her novels and I'm so excited for this new one. It's always so interesting to read about what life was like in Nazi Germany and to see how different characters fought against the tyranny. 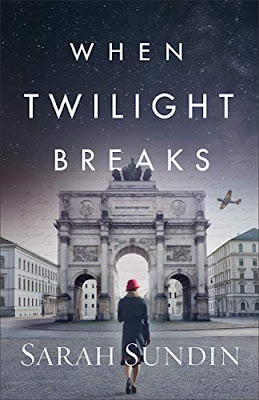 About the Book
Munich, 1938. Evelyn Brand is an American foreign correspondent as determined to prove her worth in a male-dominated profession as she is to expose the growing tyranny in Nazi Germany. To do so, she must walk a thin line. If she offends the government, she could be expelled from the country--or worse. If she fails to truthfully report on major stories, she'll never be able to give a voice to the oppressed--and wake up the folks back home.

In another part of the city, American graduate student Peter Lang is working on his PhD in German. Disillusioned with the chaos in the world due to the Great Depression, he is impressed with the prosperity and order of German society. But when the brutality of the regime hits close, he discovers a far better way to use his contacts within the Nazi party--to feed information to the shrewd reporter he can't get off his mind.

This electric standalone novel from fan-favorite Sarah Sundin puts you right at the intersection of pulse-pounding suspense and heart-stopping romance.
What upcoming release are you eagerly anticipating?
Posted by Ashley Sapp at 11:00 PM