Can't Wait Wednesday is a weekly meme hosted by Wishful Endings that spotlights and discusses the books we're excited about that we've yet to read. Generally, they're books that are yet to be released. It's based on Waiting on Wednesday, hosted by Jill at Breaking the Spine.
This week I'm featuring The Iron Raven (The Iron Fey: Evenfall #1) by Julie Kagawa releasing February 9, 2021. I'm beyond excited for this one! I LOVED the original Iron Fey series and am ecstatic to have Puck finally tell his story. 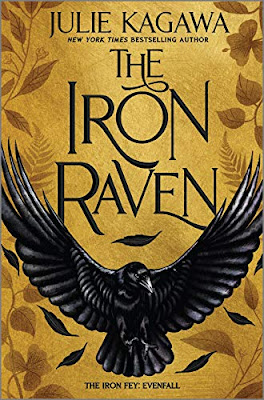 About the Book
Wicked faeries and fantastic danger… Welcome to book one of the new trilogy in New York Times bestselling author Julie Kagawa’s Iron Fey fantasy series, as infamous prankster Puck finally has a chance to tell his story and stand with allies new and old to save Faery and the world. For fans of Holly Black and Cassandra Clare!

“YOU MAY HAVE HEARD OF ME…”

Robin Goodfellow. Puck. Prankster, joker, raven, fool… King Oberon’s right-hand jester from A Midsummer Night’s Dream. The legends are many, but the truth will now be known, as Puck finally tells his own story and faces a threat from a time before Faery began. A threat that brings him face-to-face with a new enemy…himself.

With the Iron Queen Meghan Chase and her prince consort, Puck’s longtime rival Ash, and allies old and new by his side, Puck begins a fantastical and dangerous adventure not to be missed or forgotten. Evenfall is coming, and with it a reckoning that even their combined powers and wits may not vanquish, as a shadow falls over the lands of Faery and the world slips into chaos.

What upcoming release are you eagerly anticipating?
Posted by Ashley Sapp at 11:00 PM