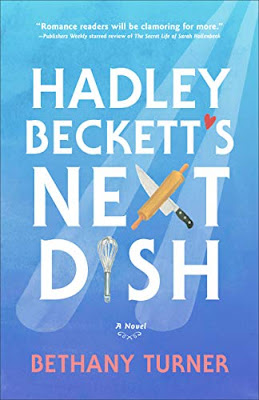 About the Book
Celebrity chef Maxwell Cavanaugh is known for many things: his multiple Michelin stars, his top-rated Culinary Channel show To the Max, and most of all his horrible temper. Hadley Beckett, host of the Culinary Channel's other top-rated show, At Home with Hadley, is beloved for her Southern charm and for making her viewers feel like family.

When Max experiences a very public temper tantrum, he's sent packing to get his life in order. When he returns, career in shambles, his only chance to get back on TV and in the public's good graces is to work alongside Hadley.

As these polar-opposite celeb chefs begin to peel away the layers of public persona and reputation, they will not only discover the key ingredients for getting along, but also learn the secret recipe for unexpected forgiveness . . . and maybe even love. In the meantime, hide the knives.

Fan-favorite Bethany Turner serves up a heaping helping of humor and romance with this thoroughly modern story centered on cooking, enemies, and second chances.
Amazon / Goodreads
My Thoughts
Bethany Turner has quickly become my go-to author for romantic comedy. Hadley Beckett's Next Dish is another hilarious, laugh-out-loud funny, impossible to put down read from her. I loved it so stinkin' much! It might just be my new favorite from her which is a tall order because her previous ones are some of my favorite rom-coms ever.

This one was full of lighthearted moments, but also a lot of depth, too, dealing with some deeper and more emotional issues. It struck the perfect balance between the two and made it feel more true to life.

I watch a lot of the Food Network, so I loved the fact that this featured characters from cooking shows. It was almost like getting a sneak peek behind the scenes. It was so fun!

I liked Hadley right off. She was sweet, kind, humble, relatable, and so down to earth. It felt like she could be a friend.

Max's introduction was unforgettable, that's for sure. Memorable, but not in a good way. He was definitely a pompous, self absorbed jerk in the beginning and I wondered how in the world he could redeem himself. But it wasn't long, though, before he charmed me and by the end of the book, became one of my favorite leading men I've read about in a while.

I loved every second I spent with these characters and didn't want my time with them to end. Hadley Beckett's Next Dish gets a huge recommendation from me. It's one of the best books I've read all year.
Five Stars
Posted by Ashley Sapp at 12:00 AM