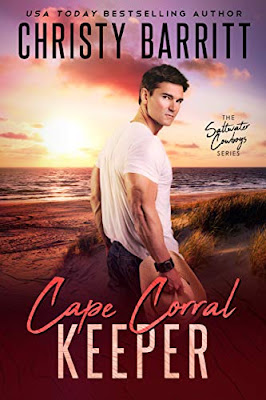 About the Book
They agreed to marry. But they never agreed to fall in love.

When Cape Corral Fire Chief Dillon McGrath saves a woman wearing a wedding dress from drowning, he knows he’ll have a great story to tell the guys at the station later. He never expected to get personally involved in the woman’s plight to stay alive.

Gracie Loveland had no choice but to run only moments before saying “I do” to her manipulative fiancé. Staying would have ultimately meant her death at the hands of the cruel man. Desperation, along with a dormant feistiness, surfaces as she fights to survive.

Only one plan might keep Gracie safe and help Dillon preserve the island’s wild horses. The idea seems crazy, but Dillon and Gracie can think of no other options. However, a foe from Gracie’s past is closing in, determined to get what he wants regardless of whose life he destroys in the process.
Amazon / Goodreads
My Thoughts
I really enjoyed this third installment of Christy Barritt's Saltwater Cowboy series. Like I've come to expect from Barritt's books, it grabbed me from the very first sentence and didn't let go until the thrilling conclusion. It begins with a woman wearing a wedding dress falling off a boat and almost drowning. Talk about an exciting beginning! I had to know this woman's story. There was a great sense of urgency, a feeling of impending danger always lurking just around the corner. It made for a fast paced and hard to put down read.

If you're a fan of romantic suspense, check out this series. Each book can standalone, but it'd still recommend starting with book one.
Four Stars
Posted by Ashley Sapp at 5:00 AM