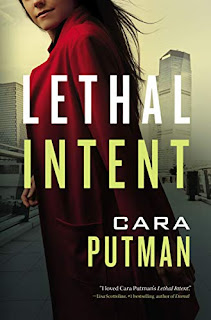 This week I'm featuring Lethal Intent by Cara C. Putman releasing January 12, 2021.
About the Book
If they expected silence, they hired the wrong woman.

Caroline Bragg’s life has never been better. She and Brandon Lancaster are taking their relationship to the next level, and she has a new dream job as legal counsel for Praecursoria—a research lab that is making waves with its cutting-edge genetic therapies. The company’s leukemia treatments even promise to save desperately sick kids—kids like eleven-year-old Bethany, a critically ill foster child at Brandon’s foster home.

When Caroline’s enthusiastic boss wants to enroll Bethany in experimental trials prematurely, Caroline objects, putting her at odds with her colleagues. They claim the only goal at Praecursoria is to save lives. But does someone have another agenda?

Brandon faces his own crisis. As laws governing foster homes shift, he’s on the brink of losing the group home he’s worked so hard to build. When Caroline learns he’s a Praecursoria investor, it becomes legally impossible to confide in him. Will the secrets she keeps become a wedge that separates them forever? And can she save Bethany from the very treatments designed to heal her?

This latest romantic legal thriller by bestseller Cara Putman shines a light on the shadowy world of scientific secrets and corporate vendettas—and the ethical dilemmas that plague the place where science and commerce meet.

“Intriguing characters. Romantic tension. Edge-of-your-seat suspense. And a fast-paced ending that will leave you exhausted (in a good way!).” —Robert Whitlow, award-winning author of Promised Land
What upcoming release are you eagerly awaiting?
Posted by Ashley Sapp at 11:00 PM