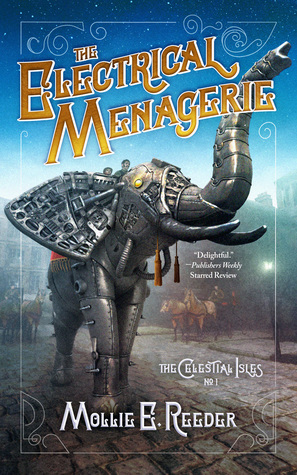 About the Book
The Electrical Menagerie, one-of-a-kind robotic roadshow, is bankrupt.

To save their show, Carthage & Huxley risk everything in a royal talent competition, vying for the once-in-a-lifetime chance to perform for the Future Celestial Queen. In this stardust-and-spark-powered empire of floating islands and flying trains, The Electrical Menagerie's bid at fame and fortune means weathering the glamorous and cutthroat world of critics, high society, and rival magicians -- but with real conspiracy lurking beneath tabloid controversy, there's more at stake in this contest than the prize.

Behind the glittery haze of flash paper and mirrors, every competitor has something to hide... and it's the lies Carthage & Huxley tell each other that may cost them everything.

What a wondrous and fantastical read! The Electrical Menagerie is one of the best books I've read, not just this year, but, like, ever. It's definitely got a spot on my favorites shelf and is a book I'm gonna want to reread over and over again.

It was so incredibly good, so imaginative. I'm kinda left speechless, having no idea what I can say that would possibly do it justice. It's one of those books that I just want to shove at people and yell (in the friendliest way), “READ THIS BOOK NOW!”

There was a part of me that wanted to read it as fast as possible, to devour it. But I made myself slow down and savor it. I loved every single second of it. It's as close to perfect as a book can get. If I could give it more than five stars, I certainly would.

With an almost lyrical-like writing style and many profoundly poignant moments, I'll be thinking about it for a long time to come. I highly recommend The Electrical Menagerie to everyone!