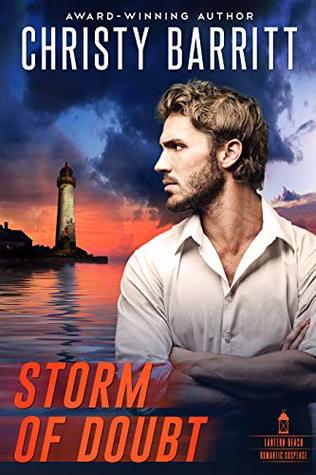 Nothing has felt right in Pastor Jack Wilson’s world since his wife died two years ago. He hoped coming to Lantern Beach might help soothe the ragged edges of his soul. Instead, he feels more alone than ever.

Novelist Juliette Grace came to the island to hide away. Though her professional life has never been better, her personal life has imploded. Her husband left her and a stalker’s threats have grown more and more dangerous.

When Jack saves Juliette from an attack, he sees the terror in her gaze and knows he must protect her. But when danger strikes again, will Jack be able to keep her safe? Or will the approaching storm prove too strong to withstand?

Storm of Doubt was another great mystery set in the town of Lantern Beach. It takes place during Christmastime and is focused on Pastor Jack and Juliette, an author who's being stalked by a mysterious man.

My goodness, what an unputdownable story! The action and suspense started at the very beginning and never let up. There was hardly a moment to take a breath.

Christy Barritt never disappoints and Storm of Doubt was another exciting read from her. Time flew by while I was in the midst of this mystery. I read it really fast and finished it in less than a day. I highly recommend this series!