This week I'm featuring The Afterlife of Holly Chase by Cynthia Hand. It was a super fun reimagining of A Christmas Carol. I loved it so much! 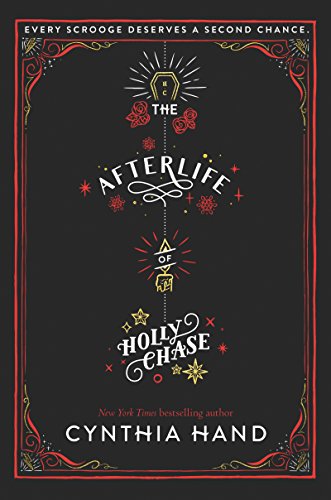 About the Book
Before I Fall meets “bah, humbug” in this contemporary YA reimagining of A Christmas Carol from New York Times bestselling author Cynthia Hand.

On Christmas Eve five years ago, Holly was visited by three ghosts who showed her how selfish and spoiled she'd become. They tried to convince her to mend her ways.

And then she died.

Now she's stuck working for the top-secret company Project Scrooge--as the latest Ghost of Christmas Past.

Every year, they save another miserly grouch. Every year, Holly stays frozen at seventeen while her family and friends go on living without her. So far, Holly's afterlife has been miserable.

But this year, everything is about to change. . .

The Afterlife of Holly Chase is a witty, poignant, and insightful novel about life, love, and seizing second (or third) chances, perfect for readers who loved Before I Fall or Dash & Lily’s Book of Dares.

The first thing you should probably know is that Yvonne Worthington Chase is dead. It was all over the news when it happened, the entertainment shows, the newspapers and magazines, even the trashy tabloids. A sudden tragedy - that's how the media described it, because she was only forty something when it happened, plus Yvonne was famous, so her death was considered a much bigger deal than an ordinary person's.

There were eight and a half million people living in New York City. It was one of the busiest places on the planet. And it was the loneliest place in the world. At least it had been. Until I'd started spending time with him.