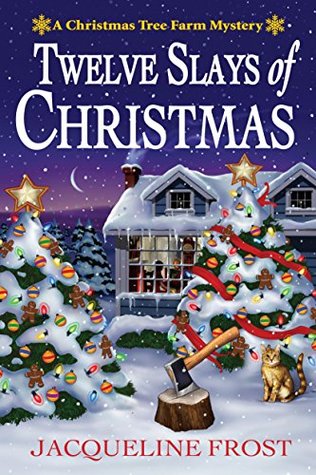 About the Book
When Holly White’s fiancé cancels their Christmas Eve wedding with less than two weeks to go, Holly heads home with a broken heart. Lucky for her, home in historic Mistletoe, Maine is magical during Christmastime—exactly what the doctor prescribed. Except her plan to drown her troubles in peppermints and snickerdoodles is upended when local grouch and president of the Mistletoe Historical Society Margaret Fenwick is bludgeoned and left in the sleigh display at Reindeer Games, Holly’s family tree farm.

When the murder weapon is revealed as one of the wooden stakes used to identify trees on the farm, Sheriff Evan Grey turns to Holly’s father, Bud, and the Reindeer Games staff. And it doesn’t help that Bud and the reindeer keeper were each seen arguing with Margaret just before her death. But Holly knows her father, and is determined to exonerate him. The jingle bells are ringing, the clock is ticking, and if Holly doesn't watch out, she'll end up on Santa's naughty list in Twelve Slays of Christmas, Jacqueline Frost’s jolly series debut.

If I had one word to describe this book, it'd be cute. Now that probably seems weird since the story revolves around a murder, but that's the word that keeps repeating in my mind. It starts off with a cute cover which opens up into a story featuring a super cute setting, likable characters, and a rescue cat named Cindy Lou Who.

The town of Mistletoe, Maine was so charming and the Christmas tree farm was great. The Twelve Days of Reindeer Games sounded like so much fun and a great place to visit during the holidays – well, minus the murder.

All in all, it was a good book. Not one of my favorite cozy mysteries, but not bad by any means. It'd be a great book for anyone who's in the mood for a cute, fluffy read.