Review: To Bring You Back (Rhythms of Redemption Romances #1) by Emily Conrad 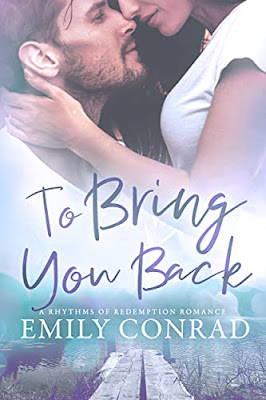 About the Book (From Goodreads)
He's determined to confront the past she's desperate to forget.
Broke in more ways than one, the last thing Adeline Green can afford is for her now-famous high school crush to descend on her quiet life.

People in the small town of Lakeshore, Wisconsin, think of her as the hard-working church secretary or as the local food truck's lunch-hour cashier. They'd never suspect the shame she's hiding.

She attended high school with both the lead singer and the drummer of the rock band, Awestruck. In fact, she used to play in the band herself, but that was back before Awestruck made it big—and before her relationship with lead singer Gannon Vaughn took a turn that ultimately led to tragedy and heartbreak.

She's living a different life now, but when Gannon shows up, he brings with him a public spotlight that threatens to expose her deepest regret. The closer she gets to him, the more she risks the carefully curated life that's finally brought her a measure of peace.

Gannon Vaughn and his rock band, Awestruck, have conquered the music industry, but he can’t overcome his feelings for Adeline.

She may have been right to cut off contact between them years ago, but thanks to the grace of God, he's a changed man. When he hears Adeline’s struggling, he sets out to turn her life around and win back the love he lost to poor choices eight years ago.

But when Gannon’s fame and their mutual regrets jeopardize their relationship anew, will grace be enough to bring them back to God and each other?

A meaningful Christian romance with a side of fame and fortune for readers who enjoy faith-filled escapes and happily-ever-afters where no one is beyond hope of redemption. Start reading today!
Amazon / Goodreads
MY THOUGHTS
What a beautiful story! This was a deep and emotional read that dealt with some heavy topics but was brimming full of hope, showcasing the wonder of God's love. I was pulled in right from the very beginning and held captive until the very last word. I know I'll be thinking about it for a long time to come.

It's full of wonderful, authentic, and flawed characters that I couldn't help but root for. I became so invested in their lives. I didn't want to say goodbye. I didn't want the story to end. Thankfully, this is just the first book in a series. I'm so excited to delve deeper into the lives of the other Awestruck band members.

I can't say enough good things about this book. It's one of the best I've read this year. I highly recommend it to lovers of Christian fiction, especially fans of Jennifer Rodewald and Becky Wade.
FIVE STARS
Posted by Ashley Sapp at 12:00 AM