This week I'm featuring Shadowed Loyalty by Roseanna M. White releasing May 2. I'm a big fan of this author, so anytime she releases a new book, I get really excited. This one sounds a little different than her usual ones, but still oh so good. I can't wait to dive into it. 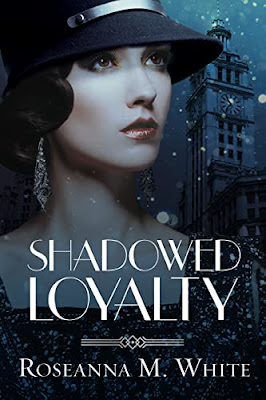 About the Book
Sabina Mancari never questioned her life as the daughter of Chicago’s leading mob boss until bullets tear apart her world and the man she thought she loved turned out to be an undercover Prohibition agent. Now she sees how ugly the underworld can be. Ambushes, bribes, murder, prostitution—she thought her beloved Papa was above all that, but clearly he isn’t. What does that mean, though, for her and their family? Maybe Lorenzo, the fiancé who has barely paid her any attention in the last two years, has the right idea by planning to escape their world.

All his life, Lorenzo’s family assumed he would join the Church, but he has different ideas—marrying Sabina and pursuing a career in the law. But despite his morals, he knows at the core he isn’t so unlike his father and brothers, which has always terrified him. Has he, in trying to protect Sabina from his flaws, in fact harmed her? It sure seems that way when he realizes he all but forced her into the arms of the Prohibition Agent now bent on tearing her family apart at all costs. But how can they rebuild what has so long been neglected…and do it in the shadow of the dark empire of the Mafia?

Shadowed Loyalty, set amid the glitz and scandal of the Roaring Twenties, examines what love really means and how we draw lines between family and our own convictions, especially when following the one could mean losing the other.
What upcoming release are you eagerly awaiting?
Posted by Ashley Sapp at 11:00 PM