Book Beginnings is a weekly meme hosted by Rose City Reader that asks you to share the first sentence (or so) of the book you're reading. Friday 56 is hosted by Freda's Voice and asks you to grab a book (any book), turn to page 56 or 56% in your ereader and share a non-spoilery sentence or two. I'm also linking up with Carrie at Reading is My Superpower for First Line Friday.

This week I'm featuring Cold Clay (Shady Hollow #2) by Juneau Black. I LOVED the first book, so I was excited to check out the sequel. I'm enjoying it, though not quite as much as the previous one. It's still good though. I think my expectations were just a little too high, lol. 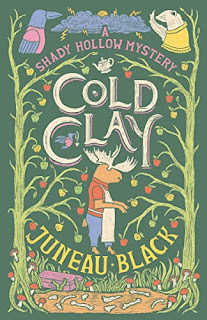 About the Book (From Goodreads)
The past won’t stay buried…

Deep in the forest is a place where woodland creatures live together in harmony. Moose and mice, owls and bears, and many more call Shady Hollow home.

When autumn comes to the village, thoughts turn to harvest time and the glorious feasts ahead. But in a far corner of Cold Clay Orchards, a rabbit reaps a more grisly crop: the bones of a moose.

Soon enough, the owner of Joe’s Mug is dragged out of his coffeeshop to the police station to answer questions about the long-ago night his wife disappeared. Joe always said she walked out, but now it looks more like murder.

Foxy reporter Vera Vixen can’t believe gentle Joe is a killer. She sets out to find the truth before Shady Hollow loses its favorite coffee-slinger. To get to the bottom of the matter, she has to dig into the past, and into the many secrets her neighbors would rather leave buried forever…
Book Beginnings / First Line Friday

As might be expected from its name, the village of Shady Hollow is nestled deep in the woods, covering a wide valley between two mountains. What might be less expected is the fact that the village residents are all animals representing many species and temperaments. Just how can a rabbit live and work alongside a fox? Why do a sparrow and a bear read the same newspaper? On a more practical level, where are the rabbit and fox working, and what is the headline on the paper?

Just as Vera was about to leave, the owl spoke again. "There is one more thing Miss Vixen," he said slowly, gathering his thoughts. "Julia Elkin was not the only strange creature whom I spotted wandering around the woods. By strange, I am of course referring to those animals who are not nocturnal, the ones who don't belong in the woods in the middle of the night."

What have you been reading lately
Posted by Ashley Sapp at 11:00 PM