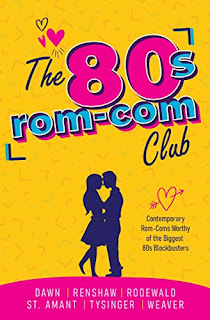 About the Book (From Goodreads)
Is there, like, anything more totally awesome than the fun, feel-good rom-com blockbusters of the 1980s? The women who make up the online Just Another 80s Rom Com Lovers Club don't think so. Join these digital friends as they each live out their own swoon-worthy love stories, minus teased bangs and mini skirts, reminiscent of some your favorite romantic comedies from the most righteous decade.

THE FIX UP by Mikal Dawn: Henley Morris and Not-the-Movie-Star Brad Pitt are teamed up on a home renovation show with tools, limited time, and a budget. The home they're assigned to renovate is a money “pitt” and they’re sure it’s out to get them. So is the general contractor. And don’t even get them started on the family of squirrels living in it…

FALLING FOR A PRICE by Bell Renshaw: Amie Lewis prefers writing about the escapades of others, but when a mysterious note arrives, it’s time to start her own adventure. Hiring Malcom Price, a handsome but obnoxious guide, is her first mistake. Being caught in the middle of his feud with Russian treasure hunters is the second. The third? Falling for him.

LAKESHORE WANDERING by Jennifer Rodewald: Hazel Wallace is working on a plan to keep her peaceful, remote life. When Bennet Crofton shows up pretending to be something he’s not, she knows she’s running out of time. Luckily for her, he hit his head and can’t remember a thing. With a sudden inspiration thanks to an 80’s RomCom, she’s got a whole new plan.

EVIE TYLER'S DAY OFF by Betsy St. Amant: When Evie Tyler plays hooky on her 30th birthday to complete the remaining 9 items on her “30 Before 30” bucket list with her best friend, she never expected her childhood crush—her BFF’s brother—to tag along. Red convertibles, impromptu concerts, and a hilarious comedy of errors collide into one day off Evie will never forget.

JUST LIKE THAT by Teresa Tysinger: New York City-based influencer Jane Holland is about to reel in the biggest partnership of her career. Life takes an unexpected turn when she’s needed in North Carolina to care for her niece. Will Jane find where she truly fits in her rural hometown—and with Andrew, her all-grown-up crush? Or, will opportunity draw her back to the life she always thought she wanted?

SURE ABOUT YOU by Jaycee Weaver: Editor, foodie, and 80s movies lover Isley Bradford lives by her trusty planner. Securing her dream job means traveling to a conference with the too-charming coworker she loathes. But with each bump in the road—some literally—he challenges her perceptions and makes her laugh. She'd had her future perfectly planned. Now? She's not so sure.
What upcoming release are you eagerly anticipating?
Posted by Ashley Sapp at 11:00 PM