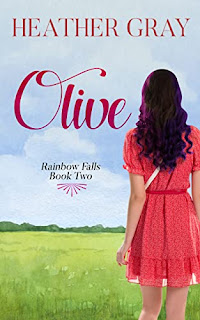 About the Book
Rainbow Falls…where life is filled with vivid color.

Olive Green’s world has turned upside down. The future she thought she was building is gone. Now she’s an unemployed CPA forced to move back home and sleep on an air mattress at her sister’s while picking up temp work to survive. Only, this latest temp job requires an NDA before she even goes to the interview. And the man who opens the door? Yeah, he’s not at all what she expected.

Damien Rhoades had it all – or so he thought. His voice was on every country music station, and he had the bank account to prove it. When reality crashed in on him, though, he ran from the bright lights of fame and from the God he’d once promised to serve. Isolation has become his self-inflicted punishment, his way of atoning for past sins too numerous to count and too dark to face. Then Olive bursts into his life driving her muscle car and lighting up his home with laughter.

Can a woman who feels adrift in her life be a guiding light? Will a man barricaded behind walls fortified with shame be strong enough to let the light in?
Amazon / Goodreads
(Available in Kindle Unlimited at time of posting)
MY THOUGHTS
You have no idea how excited I was about this new book from Heather Gray. There's just something so uplifting and special about them. Something so fun and yet heartfelt, poignant and deep. Something infinitely inspiring. Olive is all those things and more. It's my favorite of hers yet.

These characters sure tugged at my heartstrings. Country music star Damien Rhoades has been in hiding for the past few years. Ever since the accident, he's pretty much isolated himself from the world and wants as little human interaction as possible. He's dealing with a lot of guilt and self-loathing, and I just really felt for him. I was rooting so hard for him. Olive was super likable. There was something so endearing about her and her purple hair, fun sense of humor, quirkiness, and kindness.

I really loved the message of faith, of trusting God and His will. And the great reminder of His grace and the fact that anything is possible with Him.

I can't say enough good things about this novel. If you're a fan of inspirational contemporary romance, you'll love this story. I highly recommend it!
FIVE STARS
Posted by Ashley Sapp at 12:00 AM