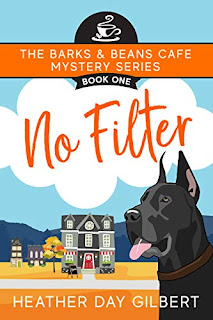 About the Book
Welcome to the Barks & Beans Cafe, a quaint place where folks pet shelter dogs while enjoying a cup of java...and where murder sometimes pays a visit.

Fed up with her go-nowhere job, newly single Macy Hatfield moves back to her small hometown in West Virginia. She joins forces with her brother Bo in his crazy new venture—the Barks & Beans Cafe, which caters to dog lovers and coffee drinkers alike.

When a golf instructor is murdered at the nearby spiritual center, Macy winds up adopting his Great Dane. Just after Macy finds a mysterious message sewn under the dog's collar, her Dane is dognapped. She launches into a relentless search for her newfound canine friend, but along the way, she digs up a cruel and confident killer.

Join siblings Macy and Bo Hatfield as they sniff out crimes in their hometown...with plenty of dogs along for the ride! The Barks & Beans Cafe cozy mystery series features a small town, an amateur sleuth, and no swearing or graphic scenes.
Amazon / Goodreads
MY THOUGHTS
I've been meaning to read this book for awhile now and was so excited to finally dive into it. And I've gotta say, it was so good! The whole idea behind the Barks & Beans Cafe was great! A coffee shop where you can hang out with rescue dogs? Sign me up! If it were a real place, I'd be a regular visitor.

I loved all of the characters, humans and dogs alike. They were all so realistic and distinct. Macy and Bo had such a sweet sibling relationship. It was nice to read about a brother and sister who actually cared about each other and had each other's backs no matter what. And I can't forget to mention Coal. What an adorable dog! I just wanted to give him a big ol' hug.

The mystery was a good one. While I had an idea of what was going on, I could not figure out who did it. This was not a predictable read. I was surprised on multiple occasions.

This was a fast paced read that I finished in record time. I couldn't get enough of it and am very much looking forward to the next one. I highly recommend it to fans of cozy mysteries.
4.5 STARS
Posted by Ashley Sapp at 12:00 AM