Review: Until Leaves Fall in Paris by Sarah Sundin 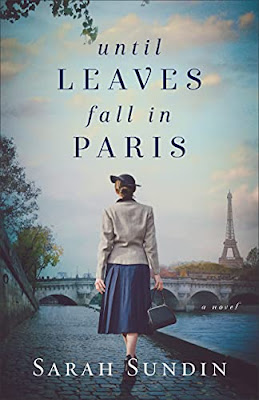 About the Book
As the Nazis march toward Paris in 1940, American ballerina Lucie Girard buys her favorite English-language bookstore to allow the Jewish owners to escape. Lucie struggles to run Green Leaf Books due to oppressive German laws and harsh conditions, but she finds a way to aid the resistance by passing secret messages between the pages of her books.

Widower Paul Aubrey wants nothing more than to return to the States with his little girl, but the US Army convinces him to keep his factory running and obtain military information from his German customers. As the war rages on, Paul offers his own resistance by sabotaging his product and hiding British airmen in his factory. After they meet in the bookstore, Paul and Lucie are drawn to each other, but she rejects him when she discovers he sells to the Germans. And for Paul to win her trust would mean betraying his mission.

Master of WWII-era fiction Sarah Sundin invites you onto the streets of occupied Paris to discover whether love or duty will prevail.
Amazon / Goodreads
MY THOUGHTS
There is no book I look more forward to each year than the new one from Sarah Sundin. She never fails to deliver and her latest release, Until Leaves Fall in Paris, just might be my new favorite. I don't know how she does it, but each book is better than the last. Just when I think it can't get better, she outdoes herself.

This time, we follow alongside two Americans living in Nazi-occupied Paris. Lucie, a ballerina turned bookstore owner, and Paul, an automaker running a factory in Paris, are more than they first appear. At first glance, they couldn't be more different. They're the very definition of opposites. But when they look below the surface, they have more in common than not.

It took me just a minute to warm up to Lucie and Paul, but it wasn't long before I absolutely loved them. I really admired their bravery in doing what they could to aid the Resistance. The stakes were so high and the consequences so dire if they were caught. That kind of courage is so inspiring. Paul's daughter Josie was adorable. She was such a sweet and creative little girl. I really enjoyed her imaginative stories about Feenee and the rock monsters.

I usually gravitate more towards WWII books set in the US or Germany, so to read about what it was like in France during that time was very enlightening. I learned so many new things.

I received an advanced copy of this book and voluntarily reviewed it. All thoughts and comments are my honest opinion.
FIVE STARS
Posted by Ashley Sapp at 12:00 AM