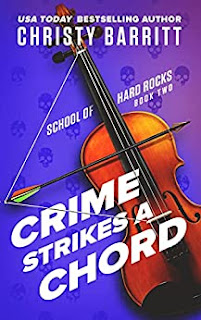 About the Book
With Christmas fast approaching and Grand Isle Music Conservatory’s big show to oversee, Camryn Paine has plenty to keep her occupied. Add a request to locate a stolen—and possibly cursed—Stradivari violin into the mix, and she fears it’s more than she can handle. After some pressure from her boss, Camryn agrees to investigate.

Things take an alarming turn when a suspect is found dead. Then someone from Camryn’s past appears with a secret that turns her world upside down. Suddenly, her busy Christmas seems perilous as well.

The more clues Camryn uncovers, the deeper she sinks into danger. With the holidays upon her, and both her past and future feeling uncertain, Camryn knows she can’t rest until she has answers. But the cost may be more than she’s willing to pay.
Amazon / Goodreads
Available in Kindle Unlimited at time of posting
MY THOUGHTS
I really enjoyed the first book in this series, so I was excited to dive into this sequel. And, I've gotta say, it was just as good. Camryn's such a fun character to read about. Her “supersonic” hearing is a great skill to have while solving mysteries. There are so many clues to be found through sound.

Camryn is hired to find a very expensive violin (worth two million dollars!) that's gone missing from the Abernathys house. Apparently, the moving company is holding their belongings hostage and demanding a ransom to get it all back. Strangely enough, the violin wasn't supposed to be packed up, but it went missing at the same time the movers were there. The investigation takes many surprising twists and turns as Camryn tries to solve this confounding case.

This was a quick and fast-paced read that kept me fully entertained. I'm eager to solve more mysteries with Camryn in future installments.
FOUR STARS
Posted by Ashley Sapp at 12:00 AM