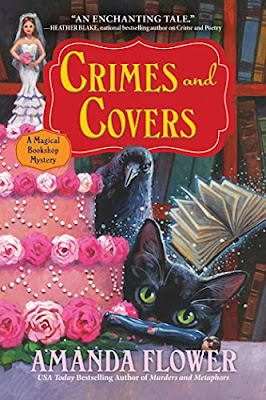 About the Book
Christmas is coming to the Western New York village of Cascade Springs, and so is the long-awaited wedding of Charming Books proprietor Violet Waverly and police chief David Rainwater. Grandma Daisy and Violet's best friend, Sadie, go all out to make the nuptials the event of the season--whether Violet likes it or not. But the reception becomes memorable for all the wrong reasons when a woman's dead body floats by on the frigid Niagara River.

Violet is shocked to recognize the deceased as a mysterious woman who visited Charming Books two days before the wedding, toting a rare first edition of Henry David Thoreau's Walden. Well aware that a mint condition copy could be worth more than $14,000, Violet told the woman she would have to have the book appraised before she could consider buying it. Most displeased, the woman tucked the precious tome under her arm and stormed out of the shop. Now she's dead, and an enigmatic message scrawled in pen upon her palm reads, "They stole my book."

It's a confounding case, indeed. But fortunately, Violet can draw on the resources of her bookshop's magical consciousness, which communicates clues to Violet via quotes from Walden. With Emerson the tuxedo cat and Faulkner the crow at her side, Violet sets out to recover the priceless book by solving a murder most transcendental.
Amazon / Goodreads
MY THOUGHTS
Crimes and Covers is the fifth installment of the Magical Bookshop Mystery series. You could probably read this as a standalone but I'd still recommend starting at the beginning just to have a better appreciation and love for the characters. I've really enjoyed this series, so I was excited to solve another mystery alongside Violet, Grandma Daisy, Faulkner, and Emerson.

Charming Books is a book lover's dream. I could imagine spending hour upon hour at the store, never wanting to leave. As in the previous books, the store played an integral role in solving the mystery. The shop aids Violet in solving the crime by highlighting clues from a specific author's works. This time, Henry David Thoreau was the spotlighted author.

There were times that the dialogue felt a little awkward and stilted. And there was quite a bit of repetition of information that had just been given, just said in a different way, which got a little annoying after a while, but all in all, I enjoyed this trip back to the charming town of Cascade Springs.

I received an advanced copy of this book and voluntarily reviewed it. All thoughts and comments are my honest opinion.
THREE STARS
Posted by Ashley Sapp at 12:00 AM