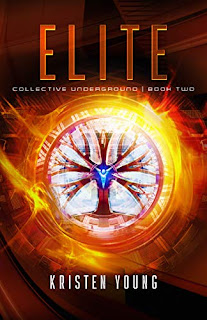 About the Book
Where do you find safety when your world is falling apart?

Apprentice Flick thought the Elite Academy was the answer to all her problems. But the revelation of her past turned everything upside down. Now, she is caught between two worlds set on a collision course.

Will she embrace the chaotic memories that flood her every waking moment? Or will she run to the security of her Elite training?

Discovering her parents’ identities takes her to a secret underground bunker where she finds new friends, opportunities, and maybe even love. But Flick must decide where her allegiances lie soon, or the Triumph of Love festival might bring about her demise.
Amazon / Goodreads
MY THOUGHTS
I really enjoyed the first book in this series, so I was excited to check out the sequel. It's been just about a year since I read Apprentice, so it took me a little bit to get settled back into this world. But once I did, I was completely invested once again. I remembered just how compelling it was, how great the characters were, and how disturbing the Love Collective was. This is not a standalone, so be sure to read book one before diving into Elite.

Kerr Flick, or Cadence as we now know her real name to be, has just gotten her old memories back, and it's overwhelming, to say the least. Especially considering her special skill. She's been brainwashed to think and act a certain way, so for her to discover that pretty much everything she knows is a carefully constructed lie is, putting it mildly, jarring. It's a lot to take in. There were times where she was very stubborn and a bit childish. But considering the fact that her world has essentially been turned upside down, her attitude wasn't unrealistic. But it did get on my nerves a bit after a while, though.

I really liked getting a peek at some of her old memories. It was very interesting to see what life was like Before. It was bittersweet, for sure, but very interesting. It really helped get a bigger picture of what was really going on and what was at stake.

I recommend this series to anyone who enjoys a good dystopia. Just be sure to start with book one.
FOUR STARS
Posted by Ashley Sapp at 12:00 AM