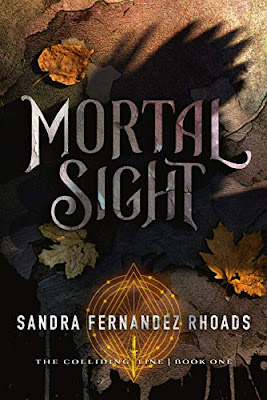 In a race against time and a war against unearthly creatures, will decoding messages embedded in the works of classic literature be enough to stop the bloodshed and protect those she loves?
Amazon / Goodreads
My thoughts
Mortal Sight was a great YA urban fantasy. I was fully invested from the very beginning. It grabbed me and didn't let go. The fast pace didn't let up but just kept building. The intrigue and mystery surrounding Cera's “visions” were so compelling.

Cera was the kind of character who was easy to root for. She's dealt with a lot in her life, but every time she got knocked down she got right back up again and fought even harder. She's fierce, kind, and giving...most of the time. She's also the typical teenager, too, with an attitude that could sometimes get on my nerves. It was quite the combo, lol. I'd go back and forth between wanting to scream at her in frustration and then wanting to give her a big hug because I was so proud of her.

As soon as I finished this book, I rushed to my computer to preorder the sequel, Realms of Light. I'm very eager to find out what happens next. If you're a fan of YA and/or urban fantasy, I recommend giving this book a try. It was so good.
Four stars
Posted by Ashley Sapp at 9:00 AM