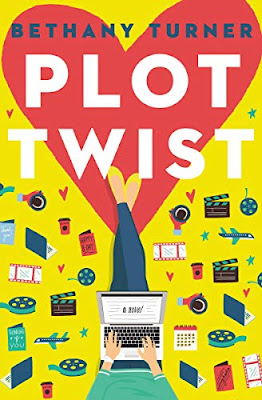 About the Book
An aspiring screenwriter has a chance encounter with an actor on his way to an audition. Over the next ten years, she’ll write the story . . . but will he end up being the star?

February 4, 2003, is just another day for Olivia Ross—a greeting card writer whose passion project is a screenplay of her own. After she and a handsome, struggling actor have a near-magic encounter in a coffee shop, they make a spontaneous pact: in ten years, after they’ve found the success they’re just sure they’re going to achieve, they’ll return to the coffeehouse to partner up and make a film together. The only problem? Olivia neglected to get the stranger’s name. But she doesn’t forget the date.

For the next ten years, every February 4, Olivia has an exceptional day, full of coincidences and ironies. As men come and go and return to her life, and as she continues to write her screenplay, she still wonders about the guy from the coffee shop—the nameless actor she’s almost certain was Hamish McDougal, now a famous member of the Hollywood elite.

But a lot can happen in ten years, and while waiting for the curtain to rise on her fate, the true story of Olivia’s life is being written—and if she’s not careful, she’ll completely miss the epic romance playing out right before her eyes.
Amazon / Goodreads
*Pre-order is available now. Release Date is June 14.
My thoughts
I LOVED this book! It was another laugh out loud, hilarious read from Bethany Turner. I've loved every one of her books, and this one was no different. It was awesome. I didn't think there was any possible way Turner could top Hadley Beckett's Next Dish, but she somehow did.

I was so totally invested in this book. I felt like I was in the story with these wonderful characters. Olivia was such a personable narrator. I experienced every emotion she did. Good, bad, and everything in between. Her lifelong friendship with Fiona was so sweet and genuine. Fi was the epitome of a best friend and I loved reading about all of her various fancy jobs. But my absolute favorite character was Liam. His dreaminess kinda snuck up on me and I ended up having a major crush on him.

I never knew what was gonna happen next, and I was so curious about what new crazy, absurd, and ironic things would happen to Olivia on the next February 4. Was some suspension of belief required for a few of the things that happened? Yes, but I thought those parts were so much fun. Would those things ever happen? No, probably not. But isn't it fun to imagine that it could?

I was left with the best kind of book hangover when I finished. I wanted to read it again immediately. If you're a fan of romantic comedies, Plot Twist is a must read. It felt like a wonderful and highly entertaining homage to all the great rom-coms through the years. I highly, highly recommend it.

I received a complimentary copy of this book. Opinions expressed in this review are completely my own.
Five stars
Posted by Ashley Sapp at 12:00 AM