This week I'm featuring a fun Victorian romance, Manor for Sale, Baron Included (A Romance of Rank #1) by Esther Hatch. 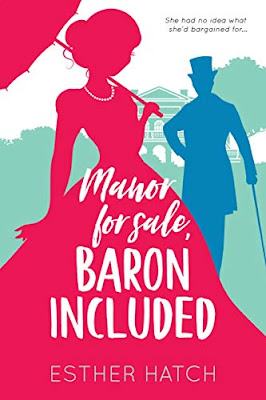 About the Book
She has everything Lord Farnsworth wants, including his manor.

Lord Farnsworth would rather rot in debtor’s prison than sell the one place that feels like home to him—his mother’s manor. That is, until he meets the woman who wants to buy it. Sally Duncan is beautiful, intelligent, and as rich as a baron—a rich baron, not a cash-strapped one like Lord Farnsworth. She’s the solution to every one of his financial problems and is bewitching to boot. All he needs to do is sell her his beloved manor and then charm her to the altar, and the manor will be his again. Simple, right?

But nothing is simple when Sally starts tearing apart his ancestral home and renovating it in a way no one would consider tasteful. She is wreaking havoc on everything, but he cannot give up on owning his mother’s estate again, nor can he imagine anyone but Sally as his wife.

And so he sticks with his plan.

What a horrible mistake.
Book Beginnings

Jonathan's solicitor was a horrible human being.

Miss Duncan's soft laughter was so out of place in his world of boxing that he landed flat on his left foot. If she hadn't been so delighted with herself about missing his jab, she could've caught his kidneys with a quick hook. But she hadn't noticed him losing his rhythm. He stepped away and went back to his defensive stance once again. "Well done."